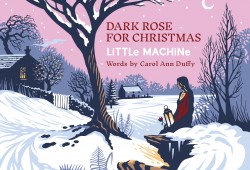 ‘Dark Rose for Christmas’ is now available to purchase from our online shop £12.99 plus p&p. The Album can also be downloaded from Amazon, iTunes  and CD Baby.

With cover art designed by Tom Duxbury the limited edition CD is expected to sell out quickly so please get orders in fast. To find out more about the project and to receive alerts about the release and our Christmas shows with Carol Ann please subscribe to our newsletter.

Last year Carol Ann suggested we create musical settings of the Christmas poems she had written for the ‘Twelve Poems of Christmas’ series published by Candlestick Press over the last six years. We composed six settings and performed them at Edinburgh’s Festival Theatre Studio and live on the BBC Radio Scotland Arts Show with Janice Forsyth in December 2014.

The original set consisted of ‘Advent’, ‘Christmas Eve’, ‘The Mistletoe Bride’, ‘December’, ‘The Single Bed’ and ‘The Bee Carol’, and the songs were so well received that the idea of the Christmas album was born with the Poet Laureate agreeing to write four new ‘lyrics’ to meet our demand for the standard ten album tracks. Carol Ann actually gave us five brand new ‘songs’ to work on: ‘Elvis’, The Lord of Misrule’, ‘Oh Hogmanay’, ‘The Lineage’ and ‘Dark Rose for Christmas’ which became the title track.

We spent the summer honing the arrangements and recording at Hotel Zulu studios in South London with our own Steve Halliwell in the producer’s chair. We were delighted to have the assistance of trumpet and whistle wizard John Sampson and the choir of Emanuel School in Battersea in creating a piece of festive magic, a future classic and the first album ever penned by a Poet Laureate.